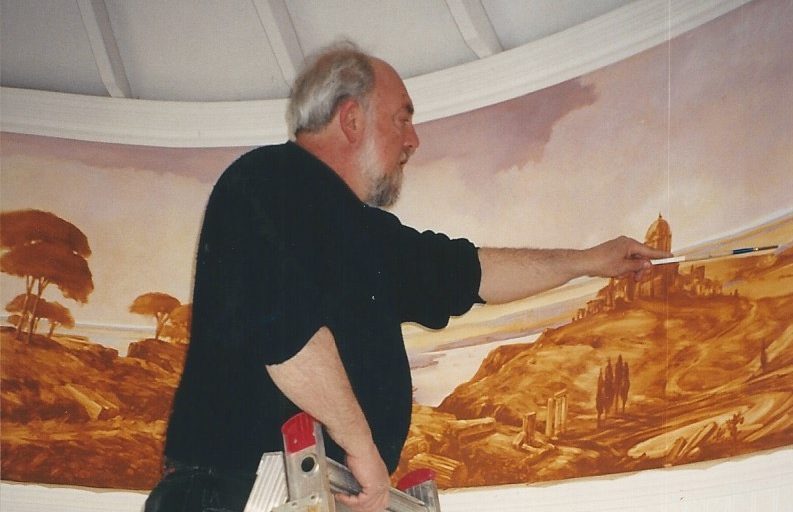 The picturesque, well composed new addition at The Granaries Bed and Breakfast encompasses the entire circumference of the day room and is close to the crown of the ceiling, where a sunroof illuminates the piece.

By Susan Michau, The Mirror

A small gathering of friends and family was privileged to see the unveiling of a work by Laine Dahlen, (Northern Lights College Visual and Graphic Arts Instructor) at the Granaries on Bear Mountain bed and breakfast location last week. Many of Laine’s students showed up and marveled at the piece as Laine so graciously explained the processes of the piece, and shared his thoughts on it with them.

In talking to Heather Newman, (owner of The Granaries on Bear Mountain), Laine discovered the Tuscany theme may have been his idea, but the vision came from a simultaneous decision after communicating their thoughts and ideas together.

The project started in October and is an oil project applied directly to the wall. The paint was applied with a mixture of linseed oil and turpentine, and applied as a step-by-step imprimatura and then wiped out, which resulted in the piece becoming more of a drawing than a painting at that stage. The decision to use the raw sienna was made at the preliminary stages of the conceptual drawing, with the intention of adding very pale pastel colours at the end, which he did. This is reminiscent of the manner of a Venetian ceiling painting of the eighteenth century. A stepladder was used to apply the medium and a unique brush system was designed to facilitate this rather lofty process. Laine fashioned extensions of the brushes from curtain rods, which were then attached to the brush handles to elongate the reach of the instruments.These came in handy for the initial drawing of major forms and blocking in large areas of tone. With the use of rags on the end of his fingers, he lifted off areas of paint to expose the highlights.

The result was a delightful piece that Granaries owners Heather and Robert Newman are extremely pleased with. The unveiling of the piece took place on the evening of June 7th, at The Granaries on Bear Mountain location, and marks the start of this artists intent to embark in a studio endeavor to enable him to focus more specifically on his own works. The piece will require a final coat of varnish in October, just to protect it further from the damages time can bestow on works of this nature.

After working on a piece for this length of time, artists tend to always look for “What the devil did while you were not awake,” as Laine so aptly puts it, but he is satisfied with the piece and grateful to be so well received. The piece adds a warm feeling of elegance and peacefulness to the room that guests will admire for some time to come.

For more information on the bed and breakfast and the special honeymoon, romance, wedding and spa packages available visit www. thegranaries.com or contact Heather Newman toll-free at (888) 782-6304 or locally at (250) 782-6304